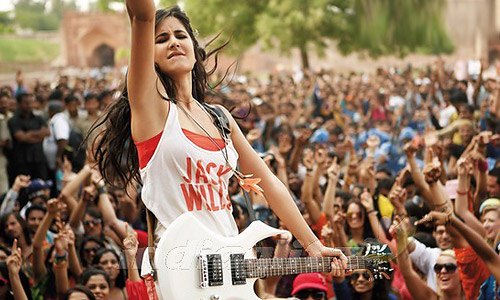 Since I went back to our “Auto Dance” in the last article, there is one more song (among many others of course) without which the Auto Dance saga will remain incomplete. During our 1st year, the RomCom Mere Brother Ki Dulhan was released. I watched this movie simply because of lack of any better option. ‘When in doubt, watch a movie’ has always been my mantra for good times. And this was the only watchable option that weekend. I didn’t know much about it except for the fresh pairing of Imran Khan and Katrina Kaif. Also thrown in was Ali Zafar whose Tere Bin Laden got him both critical acclaim and a new life in Hindi film industry (I somehow don’t like calling it Bollywood).

Not expecting much from the movie, it was quite good time pass. It was a light romance with some really good comic moments in between. The music was also good. The refreshing thing was the portrayal of Katrina’s role in this movie and a little different take on the coveted arranged marriage. Katrina played the role of a 27 years old happy-go-lucky girl. Her parents had let her have a pretty independent life and she has enjoyed it to the fullest. She is perfectly fine for an arranged marriage. Her role breaks many stereotypes and reflects the contemporary parents and their well-raised independent kids who are absolutely comfortable in their own skin. Though it has its own flaws but a good attempt I must say.

Dhunki Laage song that introduces and establishes Katrina’s character to us and I absolutely connected to the premises. Not only the song has lively music and lyrics but also a great video to go with. The singer Neha Bhasin brings it to life. I loved it instantly and I still can’t help but break into my masti mode whenever I hear it, without ever caring the place or the moment. My friend Arpita has been both the evidence and my partner in crime for all the masti that we did on this song; while walking in campus, on the road outside campus, at Chhota, in hostel hallways and courtyard and what not. And of course the Auto rides. This song always takes me to those beautiful evenings when we didn’t have a care in the world and would break into crazy dancing on the road whenever it played.

Shrey is a dear friend, my batch-mate, a very good singer & musician and above all a very grounded and honest person in my opinion. I’ve always seen him with his very sweet smile and a very easy, unpretentious demeanor. I experienced his music in its raw form on a night sometime during 1st term if I remember correctly.

It was almost 3-4 AM and like always, I was still awake without any purpose. I was in a foul mood and was still not able to make sense of lot of things that life at a b-school throw at you. People can be really mean at times and without any real purpose. This was one such day and I was aghast. I played baddy (Badminton) for some 2-3 hours to take my mind off but it didn’t help much. Finally I just sat on Palaash (1st year boys hostel) entrance as it was dark and I wanted to be left alone. It was dark, lights were switched off and there weren’t many people around, just 2-3 people playing baddy. Random music was playing here and there which was commonplace in MICA.

After some time Shrey also came there and sat on the opposite side of stairs. He was carrying his guitar. We just started making small talk. Apparently he was also pissed off about something and was there for same reason as me. He asked me if I would want to hear something. I’m always game for live performances and it seemed like a good idea. He played one of his own compositions Ankahi. It was a beautiful song and Shrey sang it with such heart that I got lost in his music. Then he sang some more songs. We both got lost in that music and like always it worked like a therapy. After an hour or so, I was relaxed and in a very good state of mind having soaked in Shrey’s soulful voice. It was a beautiful random experience at MICA and I witnessed some serious talent.